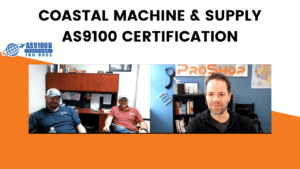 Coastal Machine & Supply Inc is a mid-size machine shop in Louisiana that caters to the oil & gas and commercial markets. With about 20 CNC machines in their 36,000 sq/ft facility, it’s a busy place, delivering both quick turn projects and production machining. With both ISO 9001 and API Q1 certifications, they have built a reputation for quality and reliability over their 16 year history.

When Coastal was 2 years old, they already saw the need for an ERP system to help them grow and scale. They chose E2 as it was a widely used system that seemed to be suited to their business. As they grew, it helped them organize their business and they used it for estimating through invoicing. “We made it work for us,” says Kody Guidry, Operations Manager of Coastal. But after several years it really got difficult to manage things and they realized they were spending too much time managing the system and developing workarounds to run their business. One area that was particularly difficult was the quality modules. “The quality module was very inefficient.,” says Kody, “There were big gaps in how disconnected all the information was. It was very time consuming. We give bonuses to our employees based on the quality metrics, and it took forever to get those numbers.” 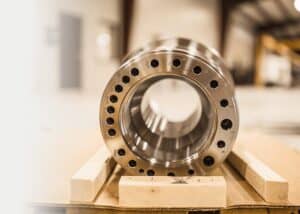 In early 2018, an employee from another nearby machine shop joined the Coastal team. That employee had moved from a ProShop customer and told Kody about ProShop. They were intrigued by the capabilities but were really hesitant to invest the time and effort to move systems after 14 years of legacy data in E2. After a demo and a visit to the ProShop booth at IMTS, they pondered their decision for another year, continuously running into situations they knew ProShop would solve, and finally pulled the trigger in late 2019. 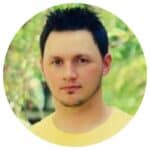 “ProShop is one of the best decisions we have ever made”

After going through the Training and Implementation Process (TIP) they went live at the end of December, and by the end of January were using ProShop exclusively. They had planned on a much longer transition time, with about 300 active jobs in E2 at the time of going live in ProShop, but the time savings were so obvious and immediate, that they decided to close out all 300 jobs in E2 and transfer them to ProShop mid-process. “It was a lot of work,” says Kody, “but it was totally worth the effort because the cost savings were so high!”

“One of the main reasons we chose ProShop was because of the integrated QMS.  We knew that would be a big time saver, but we had no idea it would bring so many improvements to every other part of the company.” Kody explained. “In hindsight, it was one of the best decisions our company has ever made. The metrics are mind blowing! Even some of the things we were hesitant about have ended up being so much better,” Kody continued,“even one of our most skeptical employees, Chandler, an inside salesperson, who was a big fan of the E2 estimating module, eventually became a convert.”  Kody saw the bigger picture and focused on the pain points of E2. Chandler explained, “I never would have guessed I’d say this, but I would never go back to E2.  ProShop has been a game changer for me. I love it so much!  It looked like ProShop was more complicated than E2, during the demos, but it turns out all those features are really essential, and have transformed the way we estimate jobs – it’s totally paperless now. We even use ProShop’s Process Development tool to catch mistakes before they happen.  We are being more strategic and proactive in the sales department and are quoting better.”

It’s hard to underscore how big the changes at Coastal have been. In the estimating department they had employed three full-time estimators (including one of the owners), a data entry clerk, and the manufacturing department would provide numbers for setup and run times.  Within a few weeks, they were able to free up the owner from needing to do estimating, and the admin person had so much extra time that she took over the AR role so the person doing that job could work on more value added things. “Even with eliminating 1.5 people from the estimating process, we are still turning our quotes around 30-40% faster than before, which means we’re winning more jobs,” explained Kody. The estimating department also used to place raw material orders for the jobs they won. “That is no longer the case,” explained Kody, “Our purchasing manager can now easily handle that, which frees up more time for our sales staff to turn quotes around faster. It’s like a domino effect of improvements.”

“We used to have a hard time managing our build to order/build to stock/pull from inventory situation,” explained Kody. “With ProShop we can see the order history much more easily, so we can make better decisions. So we will often run a few extras to put on the shelf and then we’ll send an inventory list to our customers.  We can offer a 10 piece price for a 1 piece order, and it takes just seconds to pull from inventory, with all the certs, and send it to the client. We are open and honest with our customers and they love getting a better price and parts shipped immediately. They trust us to be there for them and we are winning more business.” 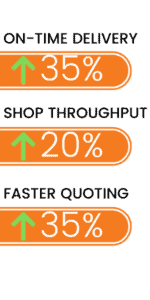 IMPROVEMENTS IN THE SHOP

Besides all the improvements in the office, major changes have been made in the shop. “We used infinite scheduling in E2,” explains Kody, “and we were always overloaded and couldn’t tell when we were going to be able to run jobs and deliver to customers. It’s hard to believe it, but our on-time delivery performance has improved by 30-40%. And our lead times have shortened as we are able to prioritize the work on every machine and see when it will be done. Not only are we able to schedule more accurately, but if we are going to be late, we can give clients ample notice. They have appreciated our improvements in delivery so much, they are sending us more work and taking it from other shops who can’t deliver on-time. They trust us and they know that we will perform for them.” He explained, “We were hesitant to try finite scheduling because we thought we needed to see where the overloads were. Finite made sense, but we were nervous. We’d never go back!”

“We love the Pre-Processing Checklist in ProShop,” explained Kody. “We used to have our quality manager do an order review of every job. It took about 30-40 minutes per order, and we process about 5 orders per day, so that totaled about 2.5 hours of his time per day.  That time has been completely eliminated with the built-in checklists, and the quality manager doesn’t need to do it anymore. It takes just a few minutes by the people who perform order entry.” By freeing up more than 25% of the Quality Manager’s time, he has been able to focus on getting all their API Q1 documentation in ProShop and is also preparing to get AS9100 certified (a process the ProShop quality team is helping Coastal with). “Oil and Gas is slowing down and we are going to diversify into Aerospace and Defense,” says Kody, “ProShop has given us the time to do that. I would have had to do that myself on nights and weekends otherwise.”

“We thought it would be nice to get rid of paper, but the benefit was much greater than we thought it would be,” says Kody. “We used to always have to chase down or find paper travelers who were getting messed up by coolant and oil.” And when a job would show up at a workstation, they often had to give the traveler back to the prior workcell to fill in the signatures of the operations that weren’t signed off.” Now because of the live work queues at each workcell, the operators don’t even see the jobs until the prior operation is signed off or queued into the next workcell (in the example of a job split). So it’s virtually eliminated that problem from happening at all.”

Kody explained, “Things just flow so much more smoothly and we are far more proactive than ever before. And even though our shop employees are using ProShop for everything, they are probably spending 60-70% less time doing computer work than they were before with E2. We estimate we are saving 20 minutes per day per person just in reduced admin time which has nearly paid for ProShop just there alone.” That time is going right into Coastal’s spindles turning more often. With that improvement and many others, Kody estimates that their overall shop throughput has increased by 20% in just 8 months after going live with ProShop. 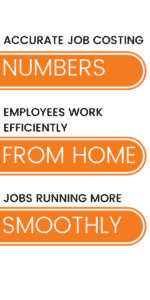 “When Covid hit and we had to send our office employees home, they were able to work just as efficiently as if they were at the shop,” Kody explained, “If we would have still been on E2, we would have been hobbled or not been able to send people home.”

Every Monday the shop foreman would print and staple all the time tickets for their 45 staff and make corrections in E2. “It took him a full day, every week to do that,” said Kody.,“now he doesn’t have to do that at all. It’s totally automated in ProShop and it’s perfect.  He’s saved so much time that he now helps estimate the cycle times for our lathe jobs which gets those numbers back faster to our sales team.”

“Even the machinists love it and have started putting pictures of setups in for our more complicated mill parts. They are documenting which tools and inserts they are using for jobs which helps them go more smoothly.”

“One of the most important improvements is that we now have good and accurate job costing numbers,” Kody explained. “We used to use standard rates which were not accurate. We now put in the actual machine rates we want to use for each machine, and we have accurate time tracking data from the employees. When jobs ship, we get instant notifications in ProShop so we look at those numbers and are able to make more strategic decisions than ever before about sales and prices. That’s a big deal during Covid when work is harder to come by.”

Kody summarized their experience with ProShop in the first 8 months after going live. “The whole culture of the shop has changed with ProShop. We never expected it to have such a big impact in all the areas of the company that it’s helped improve. Remember those bonuses I mentioned at the beginning? Those calculations now take us 70% less time!”

“I will admit that ProShop isn’t as colorful and pretty as E2 (editor’s note: something we’re working hard on improving), but it’s so much more powerful and easy to use. And good riddance to the paper! I hate printing paper now,” said Kody. “I can’t even remember the last time I changed my ink cartridge!”

Ready to take your shop to the next level?