ProShop Tooling and the Demon of Chaos

I will never forget the day that my production manager, who is a friend as well as an employee, and about whom I care a great deal, came into my office and said, “I am dying a little bit every day.” He said this because of the onerous burden that our so-called quality system and so-called ERP software placed on him. I looked him in the face and knew that he meant it.

We were spinning out of control; our diligence and hard work had resulted in more and more business, business that now threatened to overwhelm us and, ironically, destroy us. Non-Conformances? We didn’t even track them. How much time did an employee spend on a job? We just wrote it on a piece of paper. Inspection results? Just sign a piece of paper saying you did them and everything was alright. Job descriptions and routings and document control? Haphazard at best. Re-approving documents? Please!? Tooling and program control? Employee competence and certification? I’m embarrassed to tell you how random, haphazard, and subject to arbitrary discretion the whole business was. Chaos had overtaken my business and was extracting a terrible and daily price.

All this came upon us because we did good work and I had not planned for the future. We suddenly needed a real quality system and we needed it real fast. We cobbled some ersatz monstrosity together using spreadsheets, an existing document control system, and a home-brewed computer system—and it was awful. It was cheap up front, but man did it cost me every single day we used it.

After extensive research and many demos, we bought ProShop believing it to be our best hope to keep our current customers happy, our business growing, and our sanity. But between me and you, it was a wee bit of a culture shock. And by wee bit I mean a lot of culture shock. ProShop has modules for everything from intake to output and it expects everything to be done. I was in charge of a ten-person free-for-all and had to get everyone on board using the software the way it was meant to be used. Ever seen a train take a right turn? You know how malleable and eager to change machinists with 20 years of experience doing it their way are, right? And that brings me to tooling.

As our trainer showed us all of the ProShop functionality during the initial training, we asked about the tooling module. He described it, and the amount of work required seemed overwhelming. Then he explained RTAs (Rotating Tool Assemblies) and it got much, much worse. You can also define your tool holder, pull stud, collet, and out of holder length! This was simply out of the question--too much work for too little benefit. I told my production manager that we would never do tooling in ProShop and would most certainly NEVER, EVER use RTAs.

And then, everything in my shop got better - except tooling. I found this out earlier this year when I had to come out of my office and help a newer machinist set a job up. It was a disaster. We had been doing this job for years, but what tools were we supposed to use? How far were they supposed to stick out of the tool holders? Am I the only one with more than one type of 1/2” endmill in the shop? Which 1/2” endmill is appropriate for this job? Which one was it programmed for? What does it look like? How much does a broken endmill cost? These are not trivial questions. As everyone knows, if an endmill doesn’t stick out far enough you could have a machine crash. If it sticks out too far you could have chatter. Trying to decide these things during a setup wastes time and money. It sows confusion and chaos.

I realized that this bad setup was being repeated, job after job, day after day, week after week, setup after setup across my entire shop and across every job we did. It dawned on me that had I invested in defining tools and RTAs in ProShop, with pictures and unique identifiers, this would not be a problem. It occurred to me that an inexperienced machinist could have done this setup without me at all - if the tools had been defined properly. It occurred to me that I had a choice: I could pay once, up front, to define a job correctly and manage my business well, or I could pay over and over again every time I run a job in longer lead times, non-conforming parts, and frustrated employees, but I could not choose not to pay. I decided to start paying up front.

My planner resisted this change. This was more work for him and he did not like it. He made it clear that he did not like it. But I forced him to start defining all of our tools in ProShop and to document the correct tools in properly formatted RTAs for every repeat job anyway. I had come face to face with the demon of chaos and I was determined to exorcise it from my business.

So this goes on for a while. We do the hard work of getting our tools in ProShop with pictures and accurate descriptions. We key our tool matrix to the ProShop number so that the employee types in the ProShop number to get the correct tool. We make sure every part has accurate tooling called out in the description. And it is a lot of work; I’m not saying it isn’t.

But one day my planner stops by my office to admit that he not only had resisted defining tools in ProShop, but also THAT HE HAD BEEN WRONG. He likes doing it now. Employees know which tool to use so they stopped asking him questions. He got glowing feedback from the employees on the floor about how much easier it was to setup a job. Our setup times have decreased so our throughput per man hour is coming up. People are happier and less frustrated and it feels like we are a professional shop. I wish I had started earlier because I am reaping the benefits of ProShop tool management every day.

The moral of this story is to use the features of the software you bought! ProShop was written to solve problems and it will help you if you actually use it the way it was intended to be used.

I have a guy here who does not like anything—typical dour, cranky old machinist. But he can’t say enough about how much of an improvement defining the tools has been. Seeing him give praise to anything makes you think you are in the twilight zone. And it reinforces that choosing ProShop and going 100% all in, was the right thing to do. 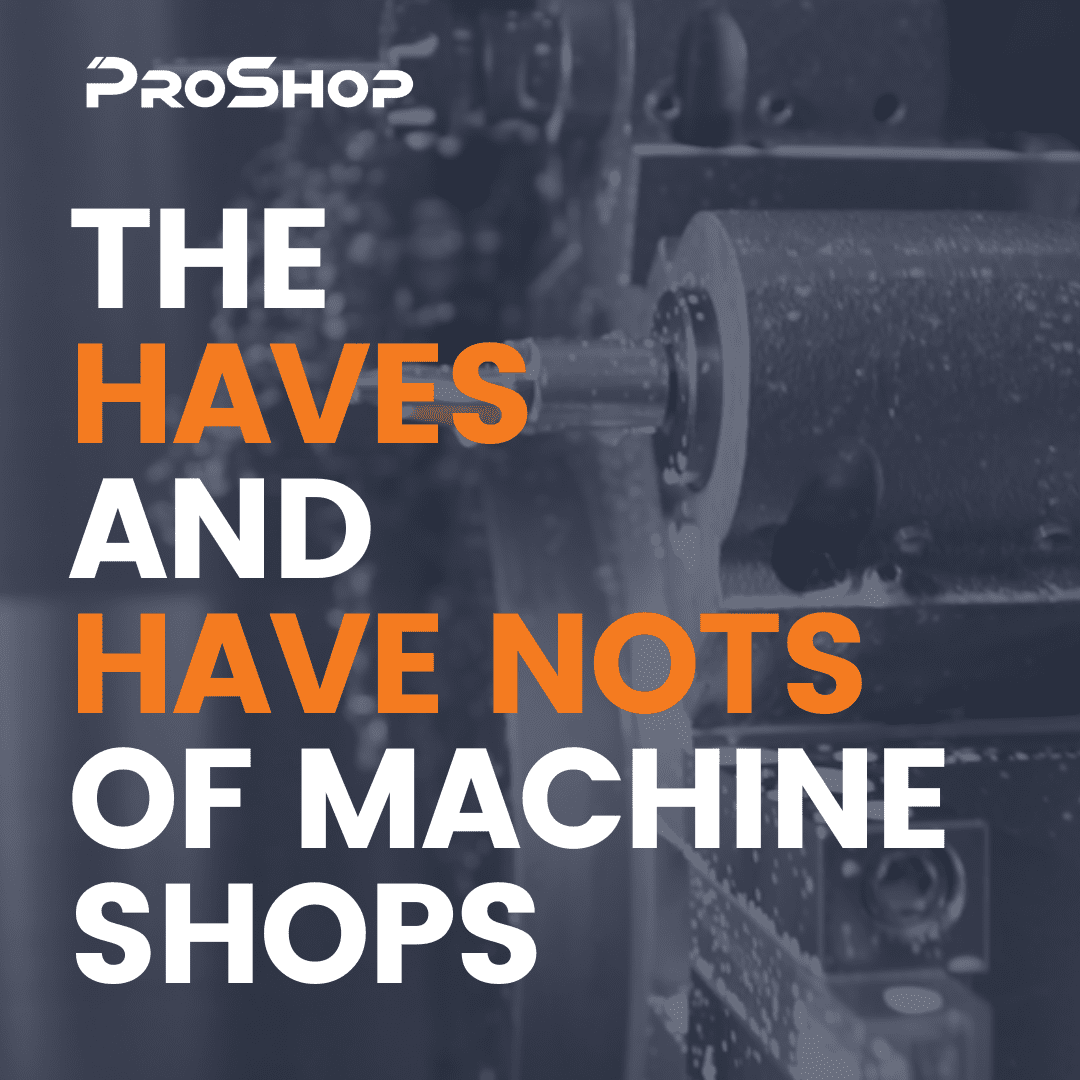 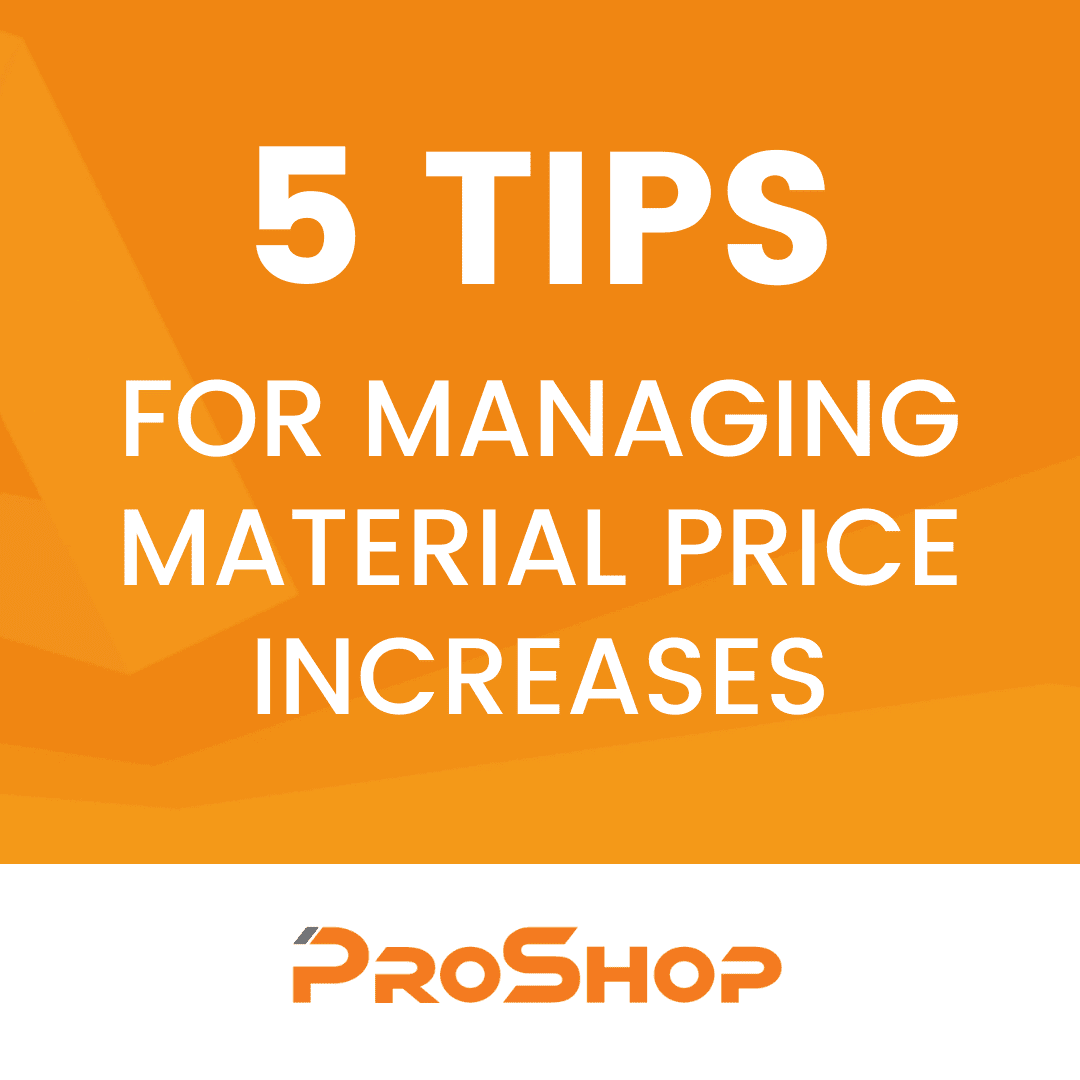 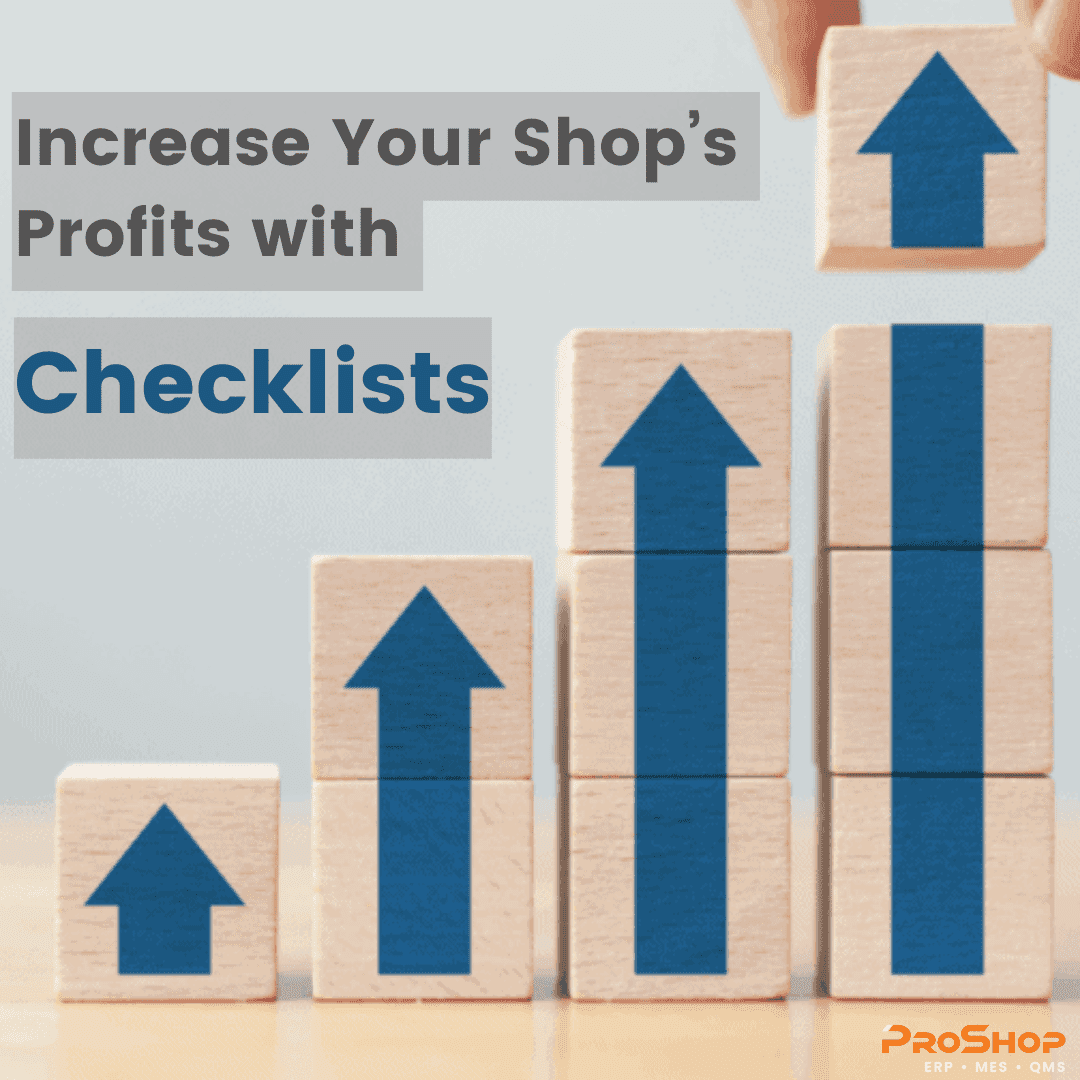 Increase Your Shop’s Profits with Checklists 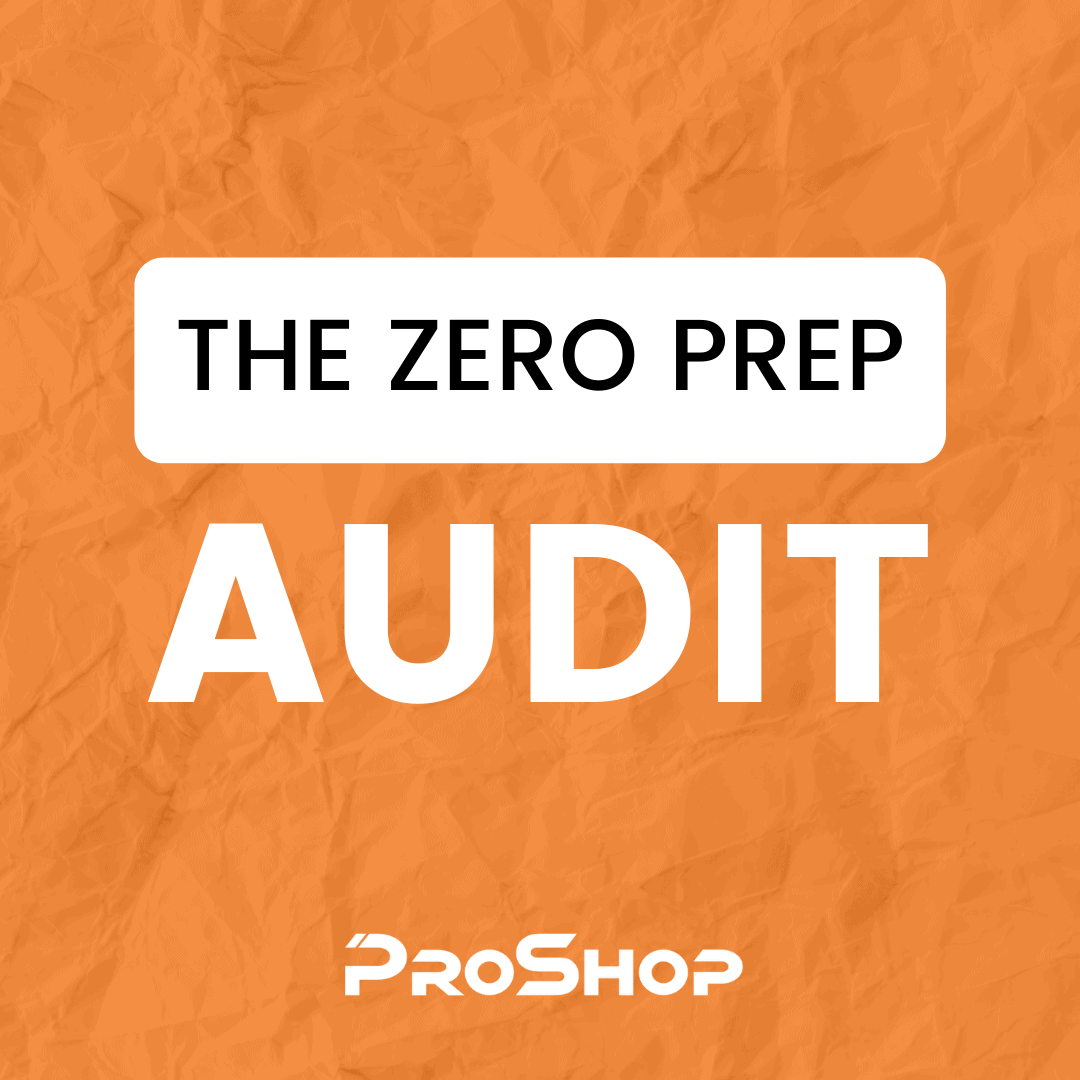 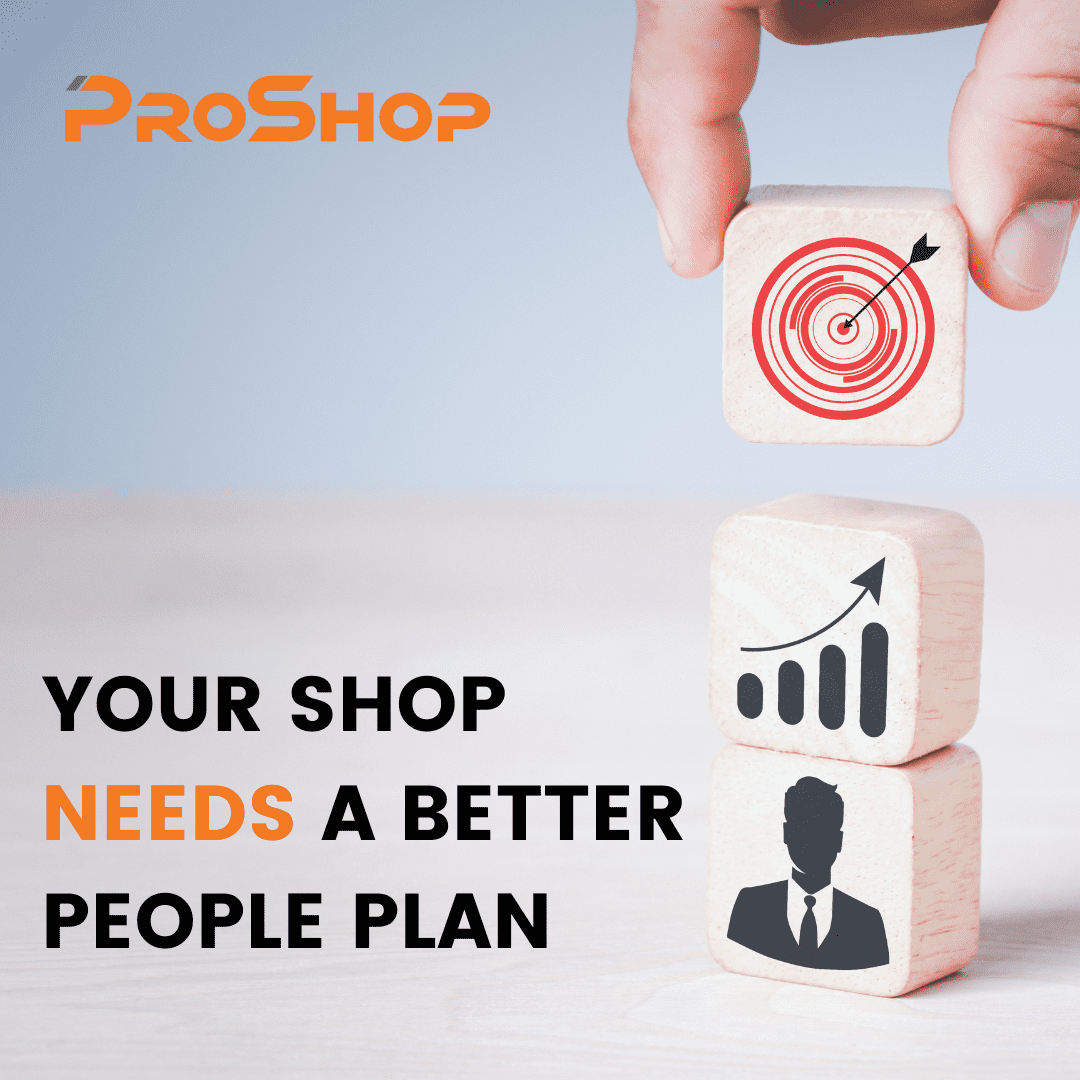